I knew I should have listened to my inner voice. I should never have said yes to helping out my friend, but I did, and the Russian with the dangerous eyes shocked me by how easily he stirred outrageous desires in my body and made me lose complete control. I did the only thing I could. I walked (all right, I ran) away to the sound of his cheap parting shot, ‘you'll be back when you need my help.’

But I haven’t been able to run away from him in my dreams. God knows I’ve tried. Then something unthinkable happens. My sister goes missing while on a backpacking trip, and the ruthless predator is the only one who can help.

He sits in his study, a beautiful, powerful man with eyes cold enough to freeze my blood.
He says he can help, but nothing is for free …

But I'm not a man given to doing favors. I'm an opportunist. There's always a price for my help. 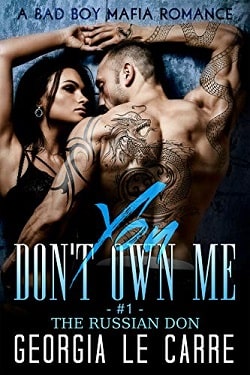 Read You Don't Own Me

The conclusion to Zane and Dahlia's story.

The sexy Russian, Zane, has taken my heart, but kept his intact.
I never knew a man like him existed, let alone that I would become part of his life. A man who can make a girl's heart pound like a freaking drum by his presence alone. He's the reason for the madness my life has become.
The more we are together the more my heart and soul cries out for him.
Olga says I am the one for him if I can learn to fly.
Now I wake up each day with only one thought.
Fly Dahlia, Fly ...

Dahlia Fury was the perfect toy. Beautiful, sassy, sexy.
I thought I could immerse myself in her flesh. I didn't expect the taste of her sweet nectar to become a drug in my veins.
Now I'm fighting hard to keep control.
She has no idea that there's nothing more I want than to be with her. She carries a lamp into my darkness and makes me feel alive in ways I've never felt.
I can leave the life of crime and be anything I want to be, she tells me. Maybe she's right. Maybe all I need is a reason.
Maybe the reason is her ...

Tasha
I knew Noah Abramovich was trouble the first time our eyes locked. I was sixteen that summer. Sitting by the pool eating an ice-cream I can still remember how it melted over my fingers and dripped onto my thighs as I stared back at him. It wasn't just his Greek god looks, the animalistic Alpha attitude, or his tall, powerful muscled body - it was the aura around him that screamed, Don't fuck with me.

At sixteen I wanted him with the passion of a woman, but mine was a world of unwritten rules. Rules that are worth more than a man's life. I didn't need anyone to tell me that he was everything I could not have.

He never looked at me again, but I watched him from afar. I could tell there were deep secrets that kept his smile hidden. Dark and mysterious he seemed to fear no one, not even my father. A man he should have. One I feared greatly. As the years passed, the afternoon when time stilled became as unreal as a dream.

I am twenty-two now and in six months I will be married to a man my father chose. I will do my duty and bring respectability to my father's dynasty, but before I give myself to that man, I must have a taste of the forbidden. Just one night with the man of my darkest fantasies, so I don't lie on my deathbed, and regret that I never reached out and took the one thing I wanted most in life.
But what if it's everything I imagined and more.
What if one taste is not enough?

In the Mafia world, your past is never far behind. If you are careless, it seeps into your future and gets you killed. Just when I had fooled myself into believing I'd stepped away from it all, it suddenly appeared in my office.

Tasha Evanoff: She is what original sin must have looked like. Blonde, beautiful, voluptuous, and with secretive sapphire eyes that see right into my tainted soul.
She comes offering one bite of the red apple.

If I had any sense I'd shut the door on her, and send her back to her father, a psychopath of the highest degree. But that's not who I am. If the pretty princess has the courage to walk into the lion's den, I'm sure as fuck not going to pass on a challenge. I'll take one bite of her apple. Why the fuck wouldn't I? I've been lusting after it for years. I will spread her wide and ravage her delicate flesh. I will leave her aching and sore and ruin her for any other man. She naively thinks everything will go back to what it was before, but I know what she doesn't. You can never have just one night of raw passion. The body will always crave more. She'll be back and I'll play it cool. But who am I fooling, I'm never letting go... 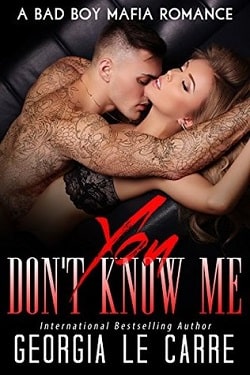 Read You Don't Know Me