All the color immediately washes from my father’s face and he looks back at me with fear in his eyes. “What?”He’s looking at me in disbelief. “Hope, whoever took you…they lied to you. They told you things about me that weren’t true.” He’s closer now and his eyes are desperate and pleading. “Who took you, Hope? Who was it?”

I take a confident step toward him. “I remember everything you did to me. And if you just give me what I’m here for, I swear I’ll walk away and you’ll never hear from me again.”

He continues to shake his head, disbelieving the fact that his daughter is standing right in front of him. I’m sure he’s also trying to process the fact that his whole life is now in jeopardy. His career, his reputation, his freedom. If it were possible, his face grows even paler when he realizes that he can’t deny it any longer. He knows I know.

I look toward the house, then back to him again. “Answers,” I say. “And I want anything you have that belonged to my mother.”

Holder has a death grip on my waist again. I reach down and grip his hand with mine, just needing the reassurance that I’m not alone right now. My confidence is quickly fading with each moment being spent in my father’s presence. Everything about him, from his voice to his facial expressions to his movements, makes my stomach ache.

My father glances at Holder briefly, then turns to look at me again. “We can talk inside,” he says quietly, his eyes darting around to the houses surrounding us. The fact that he appears nervous now only proves that he’s weighed his options and he doesn’t have very many to choose from. He nudges his head toward the front door and begins making his way up the steps.

My father pauses, but doesn’t turn around. He slowly reaches to his side and removes his gun. He places it gently on the steps of the porch, then begins to ascend the stairs.

“Both of them,” Holder says.

My father pauses again before reaching the door. He bends down to his ankle and lifts his pant leg, then removes that gun as well. Once both guns are out of his reach, he walks inside, leaving the door open for us. Before I step inside, Holder spins me around to face him.

“I’m staying right here with the door open. I don’t trust him. Don’t go any further than the living room.”

I nod and he kisses me quick and hard, then releases me. I step into the living room and my father is sitting on his couch, his hands clasped in front of him. He’s staring down at the floor. I walk to the seat nearest me and sit on the edge of it, refusing to relax into it. Being in this house and in his presence is causing my mind to clutter and my chest to tighten. I take several slow breaths, attempting to calm my fear.

My father lifts his eyes to mine and he sighs, shifting uncomfortably. “Before you say anything,” he says. “You need to know that I loved you and I’ve regretted what I did every second of my life.”

I don’t verbally respond to that statement, but I have to physically refrain myself from reacting to his bullshit. He could spend the rest of his life apologizing and it would never be enough to erase even one of the nights my doorknob turned.

“I want to know why you did it,” I say with a shaky voice. I hate that I sound so pathetically weak right now. I sound like the little girl that used to beg him to stop. I’m not that little girl anymore and I sure as hell don’t want to appear weak in front of him.

He leans back in his seat and rubs his hands over his eyes. “I don’t know,” he says, exasperated. “After your mother died, I started drinking heavily again. It wasn’t until a year later that I got so drunk one night that I woke up the next morning and knew I had done something terrible. I was hoping it was just a horrible dream, but when I went to wake you up that morning you were...different. You weren’t the same happy little girl you used to be. Overnight, you somehow became someone who was terrified of me. I hated myself. I’m not even sure what I did to you because I was too drunk to remember. But I knew it was something awful and I am so, so sorry. It never happened again and I did everything I could to make it up to you. I bought you presents all the time and gave you whatever you wanted. I didn’t want you to remember that night.”

I grip my knees in an attempt not to leap across the living room and strangle him. The fact that he’s trying to play it off as happening one time makes me hate him even more than before, if that’s even possible. He’s treating it like it was an accident. Like he broke a coffee mug or had a fucking fender bender.

Holder is kneeling at my side now, gripping my arm as I scream at the man across the room. My whole body is shaking and I lean into Holder, needing to feel his calmness. He rubs my arm and kisses my shoulder, letting me get out the things I need to say without once trying to stop me.

My father sinks back into his seat and tears begin flowing from his eyes. He doesn’t defend himself, because he knows I’m right. He has nothing at all to say to me. He just cries into his hands, feeling sorry that he’s finally being confronted, and not at all sorry for what he actually did.

“Do you have any other children?” I ask, glaring at the eyes so full of shame that they can’t even make contact with mine. He drops his head and presses a palm to his forehead, but fails to answer me. “Do you?” I yell. I need to know that he hasn’t done this to anyone else. That he’s not still doing it.

He shakes his head. “No. I never remarried after your mother.” His voice is defeated and from the looks of him, so is he.

He keeps his eyes trained to the floor, continuing to avoid my line of questions with long pauses. “You owe me the truth,” I say, steadily. “Did you do this to anyone else before you did it to me?”

I can sense him closing up. The hardness in his eyes makes it evident that he has no intentions of revealing any more truths. I drop my head into my hands, not knowing what to do next. It feels so wrong leaving him to live his life like he is, but I’m also terrified of what might happen if I report him. I’m scared of how much my life will change. I’m scared that no one will believe me, since it was so many years ago. But what terrifies me more than any of that is the fear that I love him too much to want to ruin the rest of his life. Being in his presence not only reminds me of all the horrible things he did to me, it also reminds me of the father he once was underneath all of that. Being inside this house is causing a hurricane of emotions to build within me. I look at the table in the kitchen and begin to recall good memories of conversations we had sitting there. I look at the back door and remember us running outside to go watch the train pass by in the field behind our house. Everything about my surroundings is filling me with conflicting memories, and I don’t like loving him just as much as I hate him.

I wipe tears from my eyes and look back at him. He’s staring silently down at the floor and as much as I try not to, I see glimpses of my daddy. I see the man who loved me like he used to love me…long before I became terrified of the doorknob turning.

“Shh,” she says, brushing the hair behind my ears. We’re both lying on my bed and she’s behind me, snuggling me against her chest. I’ve been up sick all night. I don’t like being sick, but I love the way my mommy takes care of me when I am.

I close my eyes and try to fall asleep so I’ll feel better. I’m almost asleep when I hear my doorknob turn, so I open my eyes. My daddy walks in and smiles down at my mommy and me. He stops smiling when he sees me, though, because he can tell I don’t feel good. My daddy doesn’t like it when I feel sick because he loves me and it makes him sad.

He sits down on his knees next to me and touches my face with his hand. “How’s my baby girl feeling?” he says.

“I don’t feel good, Daddy,” I whisper. He frowns when I say that. I should have just told him I felt good so he wouldn’t frown.

He looks up at my mommy, lying in bed behind me, and he smiles at her. He touches her face just like he touched mine. “How’s my other girl?” he says to her.

I can feel her touch his hand when he talks to her. “Tired,” she says. “I’ve been up all night with her.”

He stands up and lifts her hand until she stands up, too. I watch him wrap his arms around her and hug her, then he kisses her on the cheek. “I’ll take it from here,” he says, running his hand down her hair. “You go get some rest, okay?”

My mommy nods and kisses him again, then walks out of the room. My daddy walks around the bed and he lies in the same spot my mommy was laying in. He wraps his arms around me just like she did, and he starts singing me his favorite song. He says it’s his favorite song, because it’s about me.

Because I’ll always have my ray of hope.”

I smile, even though I don’t feel good. My daddy keeps singing to me until I close my eyes and fall asleep…

It’s the first memory I’ve had before all of the bad stuff took over. My only memory from before my mother died. I still don’t remember what she looked like. The memory was more of a blur, but I remembered how I felt. I loved them. Both of them.

My father looks up at me now, his face completely awash in sorrow. I stand up and Holder tries to take my arm, so I look down at him and shake my head. “It’s okay,” I assure him. He nods and reluctantly releases me, allowing me to walk toward my father. When I reach him, I kneel down on the floor in front of him, looking up into eyes full of regret. Being this close to him is causing my body to tense and the anger in my heart to build, but I know I have to do this if I want him to give me the answers I need. He needs to believe I’m sympathizing with him.

“I was sick,” I say, calmly. “My mother and I…we were in my bed and you came home from work. She had been up with me all night and she was tired, so you told her to go get some rest.”

A tear rolls down my father’s cheek and he nods, but barely.

Just One of the Guys By Kristan Higgins 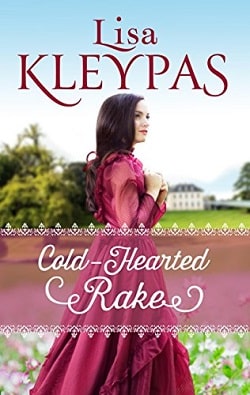