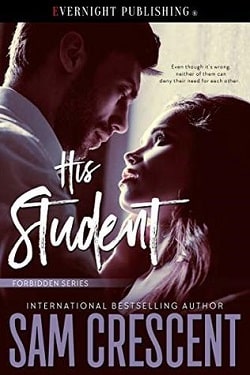 The moment Elijah looks at the curvy waitress serving him, he knows he wants her—and he’s going to have her. This is the start of his new life, in a new town, and his chance to put all of his past behind him.

But Mona Evans is not just any waitress in the diner. She’s a student, and after one night of being completely reckless with a stranger, she never expects to see him again.

So imagine her shock when she learns that Elijah isn’t just a new guy in town—he’s her new gym teacher.

Mona has never broken any rules before, but being with Elijah, it fills her with such need that she can’t say no. Even though it’s wrong, neither of them can deny their need for each other.

Whatever is going on between them cannot last the year. Mona is determined to leave town the moment she graduates. But what will she do when Elijah gives her a proposition that she can’t refuse?