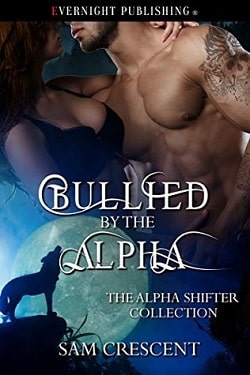 Bullied by the Alpha

Bullied by the Alpha

Abused and expelled from her pack for being fat, Cassie has to find a new alpha, one that is willing to take her with her flaws. She has heard of Abel, an alpha with a bad temper, who was expelled from his original pack and created his own in some mysterious way. She can only hope he will accept her.

Every person Abel takes into his pack has some flaw that has been rejected by others, but he doesn’t see flaws, just beauty. When he first sees Cassie, he knows he wants her. He senses the darkness and the strength inside her, and he has no choice but to use every single means possible to make her crack, so that she can use the strength that now terrifies her. Only by pushing her is he able to get under her skin and unleash the power that Cassie holds.

But Abel’s needs come flooding him. He’s the alpha, meant to be strong. No woman has ever been able to handle him. Has he found that woman in Cassie? Can she handle his brand of control? His need to protect?

Why Oleander is the Official Flower of Hiroshima?

Avoid these Mistakes in Your Maldives Trip

15 Popular Destinations in Asia for a Wonderful Vacation