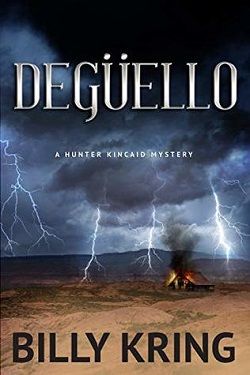 Kidnappers are snatching children off the streets in the Mexican Border town of Ciudad Acuña, just across the river from Del Rio, Texas. They are fast, professional, and disappear with the children in seconds. Hunter encounters two of them, and she gets the six-year old girl back, but the kidnappers escape. Ruthless Cartel leader Solomon Chapa is the child’s father, and he blames Hunter for the kidnapping. Ramona Chapa, the mother, does not. Another mother heard about the rescue and asks Hunter to find her eleven-year old daughter, Kelly, who was taken the day before. The trail is lukewarm, but Hunter follows it anyway. When Ramona’s daughter is taken again, she asks for Hunter’s help. Solomon’s former bodyguard, Ike, goes with her. They follow a serpentine trail to San Angelo and beyond to an isolated ranch. When Hunter and Ike get too close, the kidnappers double back into Mexico, where they turn the tables. Hunter trails the kidnappers to a walled hacienda in the desert where they wait for her. The bad men call to Hunter and tell her to surrender, that they are ready to kill all ten children, and for emphasis they murder a young girl. Hunter has no choice but to go in and face the kidnappers in a desperate move that will be the most dangerous thing Kincaid has ever attempted. Sorely outgunned and outmanned, but to save the captives, Hunter puts a desperate plan into motion, and what follows is a storm of smoke, fire, and blood, and who will survive is anyone’s guess.