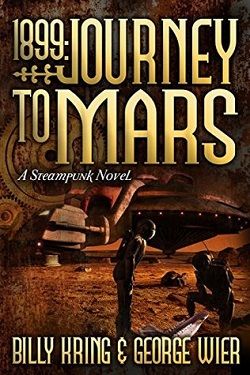 It's been ten years since the ill-fated voyage of the Arcadia to the moon. In that time, Billy and Ekka have married and raised their son, Dakota. But Billy Gostman–once known as Billy the Kid–has done anything but settle down during the intervening years. His eyes have been on the night sky and his thoughts are on rescuing a companion from the Arcadia expedition, John Koothrappally. To add to his troubles, agents from governments around the world are scrambling for the secret of the incredible space-faring ship, and will stop at nothing. When Pat Garrett shows up in Waco to question Billy at the behest of President McKinley, the agents of a secret world power close in with their deadly clones and their Westinghouse robot. Billy, Ekka, Dakota, and Pat–along with their own Tesla Guardian Ultra 3 robot (or "Guthrie" for short), must first rescue an old friend on Ceylon from execution before charging once again into the ether aboard Billy's new ship, Argent–with Mars as their destination! Along the way they pick up former Captain John Carter (CSA), his sidekick Ian Mackenzie, and Bixie Cottontree, a voodoo priestess and seer. It's war in space and an even greater war on the distant world named for the God of War himself. And this time, the odds are even longer.