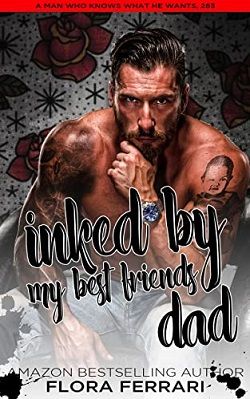 Inked By My Best Friend's Dad

Inked By My Best Friend's Dad

My best friend Tasha and her dad couldn’t be more different. Yeah, she’s got his height and good looks.

But she hates tattoos.

And her dad, Slade?

And the sexiest man alive. Did I mention that part?

So when I decide I want a tattoo, it’s my best friend’s dad who I want to do me.

I mean to ink me.

What I haven’t told Tasha, or her dad is that I’ve kinda had an obsessive crush on him since I can remember.

A pressing need a girl might get in a certain part of her body?

But I can’t tell my best friend the only reason I want a tattoo is so her dad will put his hands on me, can I.

I mean, would an older guy like him even look twice at a thick, curvy younger girl like me?

Especially the best friend of his only daughter.

My mind is made up, I want Slade and I feel like I’m the only one thinking that way until I’m invited to his birthday party.

But I don’t have a gift.

I don’t have anything a man like Slade would want.

Forty-two, and although I don’t look it, I'm feeling every year as I think about another year passing.

Tasha, my daughter’s organized for some of the old gang to swing by. I have a hunch she has anyway, but she hasn’t mentioned it.

When I call her up, she remembers what day it is. My daughter has always been a little scatterbrained.

When she asks if her best friend can come along? Sure. I haven’t seen Abby since she graduated high school. She must be all grown up by now.

But she hasn’t just gone and gotten all grown up.

She’s my daughter’s best friend, and I’m forty-two. Old enough to be her dad.

She’s just come to the party but it feels like all my problems are solved.

Until reality hits me.

She’s my daughter's best friend and half my age.

And to top it all off she’s telling me she wants a tattoo?

She’s too young, her skin too smooth.

She’s too god damned pure is what she is.

If I speak my mind, or worse. If I act on my instincts, Tasha could lose a friend.

But if I don’t do something, if I don’t stake my claim on what I can clearly see is mine, I could lose Abby forever.

Only one way to find out, and I’ll be risking more than one broken heart if my gut’s wrong.

But it’s never wrong, that’s how I know this is so right.

We’ll deal with the fallout later.

Because right now I’m falling for her, and hard.