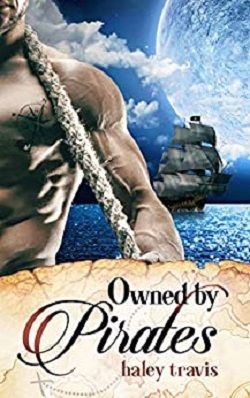 Captain Samuels:
We were pirates. Er, traders. Yet even we were repulsed by women being sold like chattel. But I couldn’t stand by while her father sold her, treating her as if she were worthless. She was a sweet, hard working girl. Her delicate blue eyes called to me even more than the sea itself. The only thing I wanted now was to keep her safe. In my arms. In my bed. My biggest fear was that I might hurt the tiny lass. I could never let that happen.

Flora:
A complete stranger asked me what I wanted. I’d never been asked that question before. The Captain was the first man to ask me to speak my mind. I made my choice – to sail away for a life of adventure rather than stay under my father’s thumb. The world was bigger out on the open sea. The colors were brighter. The feelings were… Strangely deep and powerful. I just couldn’t tell if the Captain felt the same. He was so kind to me, treating me as if I were precious. Every time he touched me, I wanted to feel like I was his to enjoy. As my life finally became my own, I began to make my own rules. I'd learn to speak up for what I need.