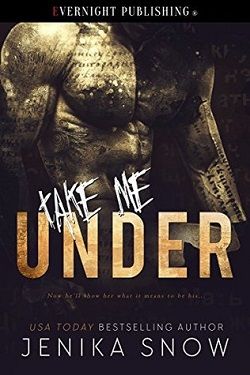 Take Me Under (The Bratva Chronicles 2)

Take Me Under (The Bratva Chronicles 2)

It might be dark, but she wanted him to take her under…

Alexa knows loving a member of the Bratva—the Russian Mafia—is dangerous. But what she feels for Yvgeny goes against all common sense. She knows the one drunken night they shared was it, but still, she wants to flirt with danger—she wants to be with him.

Yvgeny knows all too well love is not in the cards for him. The life he leads is too violent, and taking Alexa as his would mean she’s constantly put in danger.

When Alexa is compromised, Yvgeny doesn’t think twice about drawing blood and taking lives to avenge her. It’s then he knows keeping her at a distance was wrong. Now he’ll show her what it means to be his, and that he isn’t the worst mistake she’ll ever make.