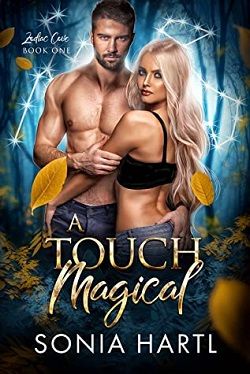 The gods and goddesses of the Zodiac gifted me with magic—but I can’t use it unless I touch my sworn enemy.

Audrey: For the first time in three hundred years, there is magic in Zodiac Cove. The problem is, it comes with a curse cast by a jealous god to sink our island into the ocean. As the descendant of Scorpio, I have the power to stop it. But I can’t access my magic unless I touch my complete opposite—an arrogant Taurus who also happens to be my ex-boyfriend’s brother. And the energy between us comes with the unfortunate side effect of making me want him.

Wes: I’ve been in love with Audrey for over ten years. Not only does she have no idea, but she hates me with every ounce of her Scorpio passion and intensity. After I talked my brother into leaving the island without her, she cut me out of her life, and now we both have magic we can’t use unless we touch. Not to mention the ancient curse we have to fight in order to have any hope of saving our home. The magic makes her think she wants me, but I won’t take her to bed unless she’s a hundred percent willing and in her right mind.

This is going to be a lot harder than battling the wrath of a god.