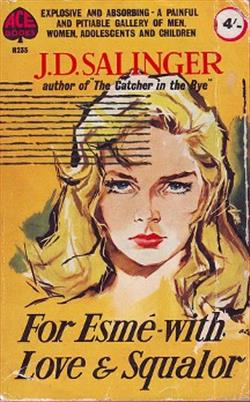 For Esmé, With Love and Squalor

For Esmé, With Love and Squalor

An American soldier stationed in Devon in April, 1944, meets a precocious 13 year old girl, named Esme, and her brother, Charles, 5. They have a brief, entrancing conversation. Esme asks the American, who tells her he is a writer, to write a story for her about squalor. He promises that he will. Then comes the squalid part. The scene shifts to Bavaria several weeks after V-E Day. The soldier, now referred to as Sergeant X, is suffering from battle fatigue - shaking hands, facial tick, etc. His table is covered with unopened packages, and letters. One of them accidentally comes to the foreground and he opens it - it is a letter from Esme with a few words from Charles.