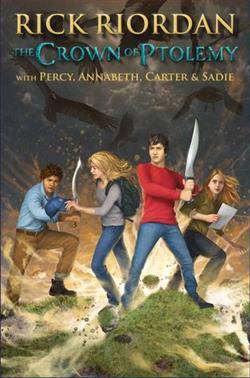 In their first encounter, demigod Percy Jackson and magician Carter Kane had to battle a giant crocodile on Long Island. A month later, Annabeth Chase ran into Carter's sister, Sadie, on the A train to Rockaway, where the pair fought a god named Serapis. Now trouble is brewing again, this time on Governor's Island. An ancient Egyptian magician named Setne has come back from the dead and is experimenting with Egyptian and Greek magic, trying to become a god himself. He's so powerful and tricky that all four—Percy, Annabeth, Carter, and Sadie—have to team up against him. But their usual weapons and spells aren't going to cut it this time. Will the heroes be taken down by a wannabe god who looks like Elvis, or will they rise to the challenge?