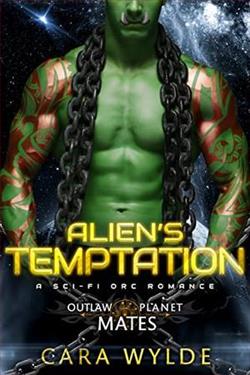 Angie
All I wanted was to travel the world. My world. Not some alien planet that’s trying to kill me at every step.

One minute, I’m admiring the pyramids, the next, I’m being abducted by aliens. Then something goes horribly wrong, and my pod crashes on the most hostile island. And right on top of another alien’s ship!

Thev is a massive wall of green-skinned muscle, all covered in tribal tattoos. Oh, and he has long, sharp tusks! Basically, he looks like an orc from fantasy movies, but when I tell him that, he disagrees. He says he’s a Zokunian, not an orc. And he also says I’m in his way, and he’s on a mission.

I hate it that I have to beg him to help me. What I don’t hate is the Zokunian custom of going around shirtless.

Thev’rar
My mission is to find my sister, bring her home, make her queen, and then follow my calling to become a priest.

That means I will never take a mate, a fate I’m resigned to because I haven’t found the other half of my soul, and I’m too old and it’s too late.

When tiny, curvy, rosy-cheeked Angie literally crashes on top of me, I’m determined to ignore her and mind my own business. But she’s sweet, enticing, and oh-so-human! The more time I spend with her, the more I start questioning what I thought was my destiny.