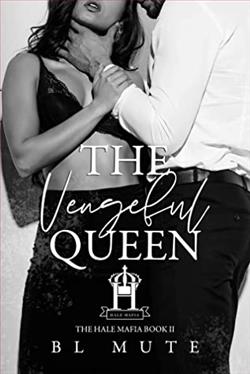 The Vengeful Queen (The Hale Mafia 2)

The Vengeful Queen (The Hale Mafia 2)

“Happily ever afters don’t exist in our world.”

Charlie
Time stopped when Teddy died. I couldn’t breathe. Couldn’t think. Couldn’t function.
Until Lucas.
He became an unlikely ally who helped me navigate through my fog of pain. I never intended for it to become more, but one night everything between us crashed to the surface. Now, Teddy is back and I’m trapped in a triangle with two of the deadliest men I know. How can I uncover my father’s murderer when I’ve ignited a rivalry that could blow my world apart?

Teddy
Four weeks. I left her for four weeks. I knew faking my death was a bad idea, but I had a plan. My men would guard her, guide her, and protect her. Not once did I think one would betray me and bed her. Lucas was once my brother in arms, now he is competition... and I don’t like losing.
I will see to it that Charlie get the answers she craves, and show her I don’t play games with what is mine. Blood will be spilled before I allow Lucas to take her from me.