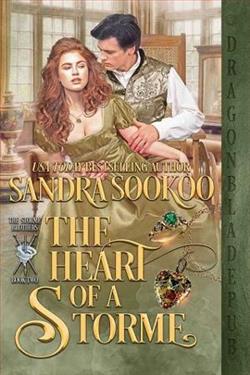 The Heart of a Storme (The Storme Brothers 2)

The Heart of a Storme (The Storme Brothers 2)

Weakness and courage are found in the same broken form if one can but see.

Major Phineas Allan Storme is struggling with his new life. After being paralyzed from injuries received during Waterloo, he’s confined to a Bath chair. Depression bedevils him, making him feel useless and helpless. With his older brother sulking in the country and his younger brother no doubt causing scandal elsewhere, he’s keeping his mother company. What the bloody hell else can he do but be a companion?

Lady Jane Marsden—daughter of the Earl of Worchester—is popular within the ton. Though she enjoys society life immensely, it doesn’t fill the emptiness in her soul. After having her heart broken twice over, she never lets males close, but when she meets a dark-haired man at a late summer rout, her thinking changes. The need and longing in his eyes draws her interest, but his personality captivates her mind. What could it hurt to introduce herself?

As Finn and Jane strike up a friendship that blooms into something more, responsibility and duty constantly intrude, but each is determined to conquer the obstacles set before them. When an emotional misunderstanding threatens their romance, his depression convinces him he’s a millstone about the necks of those he cares for, and he’s determined to remove himself from life.

It’ll take a harrowing night of heart-wrenching emotions for him and Jane to discover if love is worth risking everything to keep.