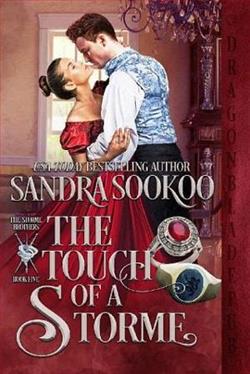 The Touch of a Storme (The Storme Brothers 5)

The Touch of a Storme (The Storme Brothers 5)

Storms are oftentimes disruptive, but they can also clear a path and bring perspective.

The Honorable Isobel Storme is a lady adrift. Her family is broken, loud, emotional, and busy with other pursuits. As the youngest in the Storme connection, she’s always fought for attention, but now that change is imminent and inevitable, she craves a distraction in the form of a scandal, and if there’s a handsome man involved, all the better as long as he doesn’t come with a title, for she despises the ton.

Doctor Royce Marsden is a surgeon of small acclaim. Though he’s the oldest son to the Earl of Worchester, his calling and his passion is running a clinic for wounded and rejected soldiers. Though he has no plans to do the pretty in society or to court a woman, he can’t avoid that reality when his father unexpectedly dies and plunges him into the title. Too bad the one woman who’s caught his eye is wildly and inappropriately improper.

As passionately intense affair develops between Isobel and Royce, the pair embraces the heated attraction with enthusiasm. Free from commitment, they dance perilously close to creating the sensation Isobel has always wanted. But when life—and death—catch them into its swirling vortex, responsibilities intrude, as do expectations tied to the beau monde.

Though fear and pressure hold them back, if they don’t fight for a happily ever after, it will never be theirs.