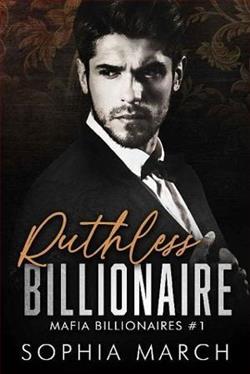 The first rule of the workplace: don’t sleep with your boss.

That’s doubly true if your boss is Vincenzo San Giovanni, billionaire and prince of one of the richest and most feared mafia families in the city. Except I wasn’t exactly aware of who my boss was, specifically, until I wound up with an FBI agent on my tail and then, through a series of unfortunate events, in my boss’s bed.

A one-night-stand. A mistake. That’s what I told myself. Vincenzo is prickly, and stubborn, a demanding boss who requires round-the-clock availability and perfection. He’s also tall, dark, and so incredibly handsome—but that doesn’t matter. It can’t matter. Vincenzo isn’t the kind of man who dates his secretary—and I’m not the kind of girl who can get involved with a mafia boss.

But as circumstances throw us together, it’s harder and harder to ignore what we both want. What we both need. Vincenzo might be my boss, but I can’t stop myself from wishing he could be so much more.

Our relationship started out as business—but soon enough, all I want is the pleasure.