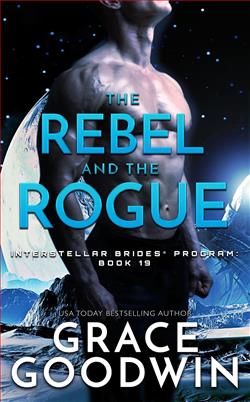 The Rebel and the Rogue

The Rebel and the Rogue

Zenos, from the Astra Legion of Rogue 5, is on a mission to find an antidote to the deadly venom flowing through his body. Without the antidote, one bite during mating will kill a hybrid Forsian's chosen female. Zenos must acquire the serum at any cost, for like his Atlan cousins, his mating instinct will eventually consume him. The last thing he needs is a distraction, but one look at the defiant female bounty hunter and he can't deny his body what she's offering—a few wild hours of pleasure.

Ivy Birkeland's entire ReCon unit was annihilated as a result of Quell, a mind-altering drug the pirates of Rogue 5 are known to distribute. A rebel to her core, her heart still broke when she was forced to walk away from her life as a Coalition fighter. Now she hunts a bounty that will allow her to catch the criminals selling Quell and avenge her dead friends. Free of the Coalition Fleet's strict regulations, she makes a deal with an unknown Rogue 5 operative to gain access to his home planet and travels to Transport Station Zenith to meet him.

When Ivy's smoking hot, one-night-stand turns out to be her Rogue 5 contact, every carefully-laid plan she's made goes to hell. Because when a rebel and a rogue are forced to work together, sparks will fly. They don't need the criminals to kill them, they just might finish each other...if they don't fall in love first.