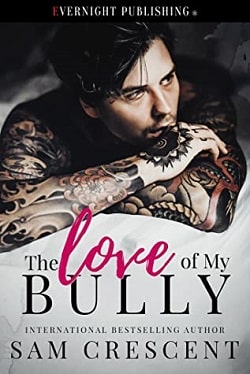 The Love of My Bully

The Love of My Bully

Prudence and Drake hate each other from the moment they meet. She only knows cruelty at his hands. For years, it fuels her, but rather than shy away, she stands up and fights.
Drake can’t stand the new girl in his town, and the one who doesn’t care about his wealth. No one can touch him. He owns the town and he will own Prudence, too.
Their hatred for one another stokes a passion neither can deny. The fire burns so bright.
He hates her, and she despises him, but there’s no stopping their need. She should walk away, but the moment his lips touch hers, she’s trapped. However, they’re from different worlds and there’s no way they can come together. Never to love, never to fight, never to be as one.
But Drake’s not the kind of man to lose the woman he loves. He didn’t want to love Pru, but he does, and now there’s no stopping it. He’ll fight for her and their future, even if it means losing everything he once treasured.
Owning Pru’s heart is all that matters.