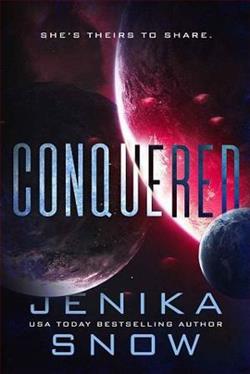 Luna Riyan dreamed of a life without violence, degradation, and vile sex. She wanted a life unlike all that she had ever known.

But her plans of escaping were derailed when she was told her virginity would be sold at an intergalactic space auction.

She knew she’d never leave if she were bought by the highest bidder, so she took the chance that would end her life if caught and left the only place she’d ever known as home.

And then she found herself aboard a spacecraft owned by three enormous, very fearsome alien warriors.

Erak, Genet, and Raimi, princes on their planet, are in search of females to carry their future heirs.

The brothers feared nothing and expected compliance in all things, and that included their future mates.

But things didn’t turn out quite as they expected when they realize their stowaway—very human and female—was the mate all three of them would be sharing.

They want nothing more than to show her they’ll protect and pleasure her above all else. But they soon realized their little female was traumatized from an ugly past and worried she may never accept them.