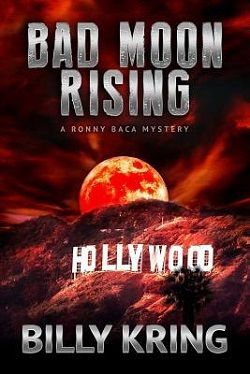 Ronny Baca and his friend Hondo Wells get a little excited when television mogul Sylvia Artell hires them to locate her missing daughter, Bodhi Artell. Both men’s bank accounts are anorexic and this opportunity is just in time. From the start, Ronny and Hondo encounter an odd assortment of people, including a helpful undocumented alien, a struggling rock band named Electrical Testicle, Sylvia’s fiancé Troy Hanson, a stunningly beautiful woman named Amber Lane, and Jericho Moon, the enigmatic leader of a hippy-like group of young people.

The more Ronny and Hondo dig, the darker the trail becomes. Evidence points to a menacing figure called The Kiowa, but he is elusive. Cryptic messages written in human blood are found at murder scenes…and at the old haunts of Charles Manson. The two detectives close in on Bodhi’s whereabouts, when out of nowhere Sylvia’s fiancé whisks Bodhi away and takes her home. Ronny and Hondo arrive at Sylvia’s mansion hours later to discover that Troy and Sylvia were married only minutes before their arrival, and Jericho Moon performed the ceremony. Bodhi appears dazed.

Things seem over, until a few days later when Sylvia and her friends are murdered. Bloody messages on the mansion walls echo the Sharon Tate murders. Troy says he and Bodhi survived the bloodbath by hiding. Ronny and Hondo return to the mansion several days later and discover a note that orders Troy to take Bodhi to a graveyard. The two friends rush to the scene and straight into a nightmare of tricks, deception, and revealed truths. Their lives suddenly hang by a thread in an inferno of bullets and flames, and Bodhi can only survive if Ronny Baca again does the impossible.