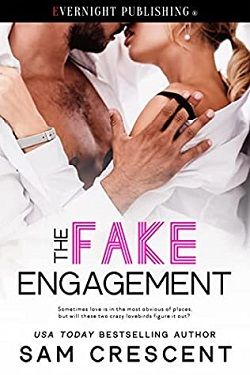 Coming from a town run by his family, Preston Boone has wanted to prove everything isn’t handed to him. He’s achieved all his goals, showing them he can make it on his own. But now, with his parents celebrating a big wedding anniversary, he knows they’re going to parade all the eligible women in front of him. A little white lie of an engagement couldn’t hurt, could it?

Eliza Drake hates her good-looking, workaholic boss. After one night of tequila, she’s fake engaged to her boss. For one month, she has to play the role of a happy fiancée, and in return, she’ll never worry about her job ever again. One month of sharing a bed, of accepting Preston’s kisses, and the feel of his arms … nothing could go wrong, right?

Sometimes love is in the most obvious of places, but will these two crazy lovebirds figure it out?