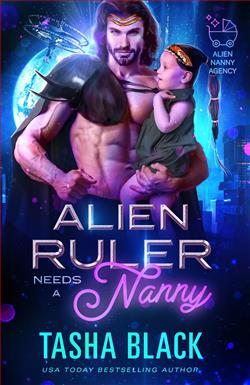 He’s in charge of an entire planet, but only she can rule his heart…

Ba’shir Kreed is a hardworking single dad who also happens to be the leader of a planet of two billion souls. He is used to dealing with any issue that comes along. But he knows he’s got real problems the minute he lays eyes on his kids’ new Terran nanny. After all, the palace publicity team gave him only three rules for dating: No one too young. No one from off-planet. And never, ever, ever hit on the help. Falling for sweet Yasmine would mean breaking all three. But Ba’sh has always been a bit of a rebel. And the more time he spends with Yasmine, the less he wants to follow the rules.

Yasmine Hall has some unhappiness in her history, but she’s excited to set her eyes on the future and her new gig as a nanny for the most powerful man on the planet. Thankfully, energetic Pia and soft-spoken Jax are amazing kids. And their father may be intimidating, but something about the way he talks to her makes Yasmine feel seen for the first time in a long time. She’s just starting to feel like she’s connecting with them all when her past suddenly catches up with her. She may have thought she landed an incredible nanny gig because of her work with the elderly on Terra-17, but it turns out the life she vowed to leave behind was front and center all along.

When danger arrives at the palace, Yasmine may have to choose between protecting her peace of mind, and defending the family she has come to love. Will Ba’sh give in to temptation, even if it means breaking all the rules? Or will Yasmine put her principles ahead of her own happiness, and run before she ever gets the chance to follow her feelings?