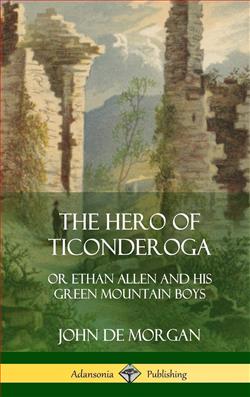 The Hero of Ticonderoga; or, Ethan Allen and His Green Mountain Boys

The Hero of Ticonderoga; or, Ethan Allen and His Green Mountain Boys

The Hero of Ticonderoga is a fictionalized account of the life and adventures of Colonel Ethan Allen, one of the most distinguished officers of the American Revolutionary War. A man of great valor and ability, Ethan Allen's story is at once unique but also quintessentially American. Spending his early decades as a hardworking farmer and businessman of the New World, Allen was instrumental in founding local militias - his 'Green Mountain Boys' - who kept order and peace in a series of colonial towns. These groups would become instrumental to the Revolutionary War effort; Allen, feeling a wellspring of patriotism within himself, summoned his militias and captured Fort Ticonderoga. This fictionalized account of Allen's military service is written in the style of a classic adventure story. Although several of the Green Mountain Boys' personalities and exploits are either invented or exaggerated by the author, the general plot corresponds to the reality of Ethan Allen's contribution to the patriotic cause.