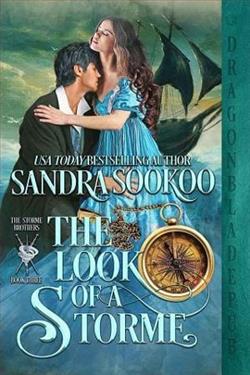 The Look of a Storme (The Storme Brothers 3)

The Look of a Storme (The Storme Brothers 3)

Fear can be a bully unless one beats it back in order to chase adventure and love.

The Honorable Francis Hildebrand Storme—Brand to those closest to him—didn’t come out of the Navy unscathed. Though he’s a handsome, gallant officer, the loss of an eye doesn’t exactly appeal to the ladies. Being the third son means he’s never had expectations placed upon him, so he’s played the rake to the hilt. Why the hell should he settle down or act like a proper gentlemen when there’s no need?

Miss Elizabeth Hayhurst is the sister of a missionary. She’s lived in Ipswich all her life, but in a few weeks, she plans to depart for India to keep house for her brother. Wearied from the war that took two suitors from her, she’s glad to put heartbreak behind her, but when she receives an unexpected kiss from a dashing, randy Navy man while at the market, she might just change her mind.

While Brand’s not used to women rebuking his overtures, Elizabeth isn’t accustomed to having a man desire her at first sight. Her lack of adventure and experience fires his imagination, while his worldliness and daring awakens her courage. They spend three glorious weeks together, both on land and on the sea, exploring, talking, and creating scandal. But then reality intrudes.

When he’s summoned to London and she readies to leave England, only they can decide what they truly want above all.