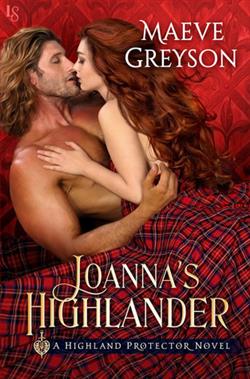 Present-day North Carolina sings with the passions of the Scottish Highlands as a fiery, time-traveling Celtic warrior takes a stubborn tour guide for a wild ride.

Haunted by lost love, Grant MacDara still dreams of tenth-century Scotland. Nothing can soothe his aching heart—until a sharp-tongued, redheaded beauty leads a tour of senior citizens through his family’s North Carolina theme park, Highland Life and Legends. Though she’s the polar opposite of the lass he left behind, Joanna Martin is the most irresistible woman Grant has ever met. But when he decides that she’s worth the risk of loving again, he tries so hard to hold her close that she nearly slips through his fingers.

Forced out of her job as a pharmaceutical sales rep by a conniving ex, Joanna is trying to make the best of her quiet new life. But one glimpse of Grant—who wields an ancient hammer like it’s just another appendage of his chiseled body—convinces Joanna not to give up on love. The one thing she can’t do is outrun her past as a loser magnet. And although Grant seems to be the last honorable man left on earth, this mouthwatering stud needs a crash course in twenty-first-century women before Joanna can trust him with her heart.