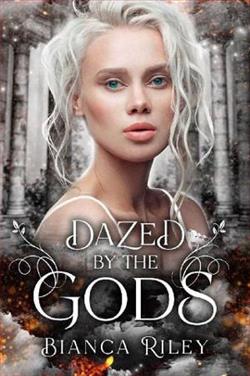 Dazed By The Gods

Dazed By The Gods

How do you make the Gods hate you?
Well if you’re me, that’s the easy part.

All you really need to do is trip, grab one of them on your way down, creating a domino effect that makes another God face plant into his brother’s junk, this leaves almost every God in the arena on their ass and pissed the hell off.
It wasn’t really my fault now was it? I'm just a lowly servant in training and someone like me isn’t allowed to accuse a God of doing something as cruel as putting their foot out in the middle of the walkway while a servant is passing with a tray of drinks.

How do you earn forgiveness from the Gods?
Turns out that’s the hard part.
The Gods are split in their decision, either I’m to be thrown to the dragon they keep as a pet beneath the arena, said dragon will either eat me or keep me as a source of entertainment or so I’ve been told.
Or I’m to become the personal slave of the three most notorious Gods. Theirs to do with as they please.
At least I get to decide my own fate.

The decision is mine to make.
Sort of.
Not really.
Okay, so they’re making me toss a coin to decide my fate, but at least I’m the one flipping the coin.
That’s something, right?