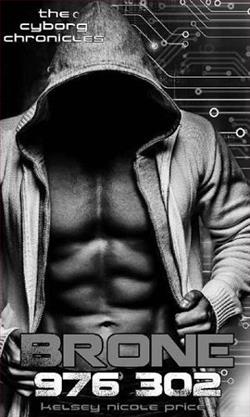 When the Global Allegiance terminated all Cyborgs, rumors were rampant that they still existed, either hidden away with wealthy collectors or—even more scandalous—part of the Cyborg Rebellion.

How the heck had I ended up here?
I’m a nerdy red headed scientist that wanted to spend her time figuring out a way to do what only Dr. Shaw had done so far-create cyborgs…spoiler alert-I did.
But all that accomplished was to put a target on my back and put the three newly created cyborgs I love in jeopardy.
When the rebellion came knocking I decided to take my chances with them…with him.
Brone. The biggest cyborg of them all. And he’s decided I’m his.
Beneath his massive size and strength beats the heart of a sweet cyborg who flirts like he was designed for it.
But I’m keeping secrets.
Ones that could destroy the already battered and weary cyborg rebellion.
I only wanted to keep my three cyborgs safe.
And maybe have my first kiss with a certain Tank Class.
Those chasing me will never stop.
I refuse to allow anyone else I care for to get hurt.
But what happens if the only choice I have left is to walk away?
And can I really leave the rebellion, my cyborgs and the Tank Class I think I could call my own behind?

I am a Tank Class-the largest model type ever created.
Built for war, I long for the one thing that has always eluded me-someone to see past my size to the cyborg underneath. Then I found her.
So what if I had to toss her over my shoulder and take her with me back to the rebellion?
Nara is meant to mine and my processors are determined to woo the pants off of her…and hopefully find a place in her heart big enough for a cyborg like me.
But my happily ever after is hard to find when the rebellion is in chaos and an old enemy has declared war on my friends and family.
As new found allies emerge, secrets are reveled that threaten us all.
And the female I want to claim as my own is the one who has been keeping them.
But I know Nara is good and kind.
And she belongs with me.
If only I could convince her of that…and the rest of the rebellion.
But I refuse to let her go without a fight. Can I show my female and the rebellion the truth before it’s too late and I lose Nara forever.?