She needed to get back around to the other side of base. There was an underground bunker that was stocked with food, water, and weapons.

If she could make it there she might survive. If not…well, she didn’t want to go there.

The silence was deafening and the darkness thick. She grabbed her weapon, listening for the odd clacking sound the Serpentis made as they communicated with each other. She could hear them in the distance.

She needed to move now. Once they realized she was still alive they’d be all over her.

Lily grabbed her weapon, ignored the ripping pain in her shoulder and slid into the dark night. 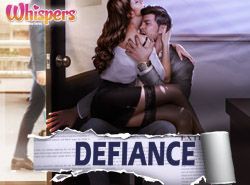 The image was one Kerr Strome didn’t think he’d ever erase from his memory. Not as long as he lived.

Blackie looking up at him, so small, fierce, with a blood-soaked shirt, gun in hand and crimson hair riding the wind as a platoon of Serpentis slowly advanced toward her position.

“I’m going back,” he snarled, pushing past Medic. The woman was quiet, her eyes full of tears as she stared up at him.

“You can’t,” Macon said calmly, though the tic that pulsed above his eye was a testament to his inner turmoil.

“I can and I will,” Kerr said, his voice deadly. “I don’t know what the hell her agenda is but she isn’t the enemy and I won’t leave her there.”

Macon shook his head. “You’re our leader. I will go.”

“No,” Kerr growled. “She’s my responsibility. I’m the one who left her there. If she dies, that’s on me.” He grabbed four laser guns and stowed them on his person as he tapped his com unit.

“Swing back around, now. Get ready for a drop, quick and low.”

“What the hell are you planning?” Macon asked roughly.

“She’s smart,” Kerr said softly. “She’ll be on the move so it’s not like we can do a grab and go. Drop me behind the ridge far enough away so those bastards don’t know and I can work my way back.”

Kerr smiled, his even white teeth slashing through the gloom. “You get this shuttle to the convoy and head to the rendezvous.” The two men stared at each other, long and hard. “That’s an order. We clear?”

The shuttle swung round and as the door lowered Macon was at the ready, his weapon in hand and aimed to kill. The surface of Drakkon was eerily quiet with only the flames of fire that were slowly spreading across base to light the dark night.

Kerr glanced at Macon, nodded, and then hit the ground running, his focus on the distant halo of light that surrounded base. The shuttle roared into the night sky but he didn’t look back. Instead his eyes moved with stealth-like precision over the dark terrain as he headed toward the underground bunker in back.

It’s where he’d go and he was hoping that Blackie would do the same.

It took a good twenty minutes of hard running before he made it back to base. He’d not encountered any Serpentis and the only sound that he heard was the whistle of wind as it flew along the surface. The cold was taking root and he knew they were safe for the next twelve hours or so. The slimy bastards would retreat to their dwellings beneath the mountains and absorb as much Kutron as they could.

He did a quick recon of the area where he’d last seen Blackie. There was nothing there besides the dead and none of them were Blackie. Kerr exhaled softly and circled around back, covering the tracks that she’d left. It was obvious her injury was heavily at play. She was an amazing soldier and wouldn’t be that careless.

He reached the gaping opening to the underground cave and ran forward without hesitation. His eyes quickly became accustomed to the gloom, but he knew the entire area like the back of his hand and could have found his way blindfolded.

At the far end, running water fell from several feet above him and he jumped along the side of it before slipping behind the wetness to disappear into the nearly invisible crevice that was there. Seconds later he pulled back a hidden panel and once the security codes were punched in, the entire rock face shifted and allowed him entrance.

The lights had already been activated inside and a soft glow lit the darkness that was so very thick down here. He crept forward, his eyes following the footprints. They disappeared abruptly and he halted, his body still, his senses on overdrive.

Kerr frowned and studied the floor. He heard the gentle hum of the generator and could smell the faint metallic scent of blood. He knew she was close by.

At the end of the long hall, the dark entrance to the galley beckoned and he cocked his weapon, in case she’d inadvertently let in the enemy. He moved forward, his steps quickening as the urgent need to find the woman gnawed deep at his gut.

He was almost to the galley when out of nowhere something smashed into the side of his head and he was knocked off his feet.